Remember Chester?  Our Thanksgiving Turkey?  Well, he had a stay of execution.  Mostly because he wasn’t from the grocery store and a certain upper echelon patriarchal family member requested a turkey injected with butter and wrapped in cellophane be prepared for the traditional meal, and partly because we never found the time to fix him. 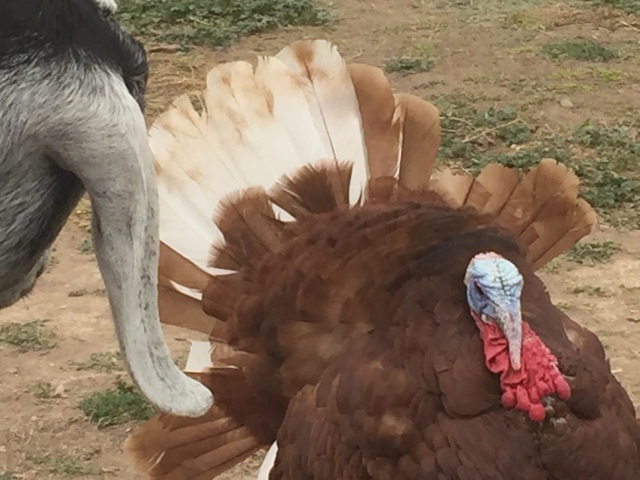 Chester, with his outdoorsy nature, lack of plastic wrap and buttered coating, was not eaten.  He became a third watchdog on our farm, roosting atop an eight inch diameter wooden post taller than the topper on the truck.  Any time the dogs barked, day or night, Chester gobbled.  He, despite his annoyingly testosterone-filled nature, puffing and poofing and African drumming his way throughout the day, dangling his blood colored chin rubies and chameleon-like nose booger…not to mention the wirey Brillo pad look alike that poked out of his chest feathers a few months ago prompting me to thrice attempt to tackle him (unsuccessfully) just so I could feel it, was a fierce protector.  Get near his flock of one female turkey and several chickens and he would do his best to scare you away.  I had recently made the announcement to all hearing ears in my family, that I thought Chester should stay.  I don’t like turkey much anyway.  We might as well keep him for a mascot.

That leads me up to today.  Well, actually yesterday, when kidding season began.  Bell, one of our 8 pregnant does, gave birth to twins, a boy and a girl.  We are bottle feeding them, so it’s as if we have newborn humans again.  Feed every four hours.  That includes 3 am when its cold, dark and…cold…outside and you’d rather be sleeping.  But, no, as dutiful goat farmers, we dragged ourselves outside, Herbert to feed the babies and I into the chilly, starry night to milk Bell.  In the dark (and did I mention, cold?).

True to form, the two watchdogs ran to the fence (they live in the pen with the goats, protecting the herd) and Chester, perched on his pole, puffed and gobbled.  I milked and shivered back to bed as instantly as possible.

Fast forward through what little night was left to this morning.  Herbert went out to feed the animals.  He couldn’t find Chester.  Suspicious, I began sleuthing for clues.  Quickly, I noticed the Chester colored pile of feathers next to the garden.  Scanning the pasture, a a Chester sized lump came into view.  With a coyote basking in the distance.

Now, I have a question:  What would you do if a coyote killed one of your farm members?

As you know, I grew up a city girl.  I have only recently crossed party lines and become officially a farmer.  So, when I saw that coyote this morning, a mixed rush of thoughts flooded my mind:

I found myself slipping quickly across the spectrum of priorities, judging people who might say, “Oh, no!  Don’t kill it!  It is just doing what its natural instinct tells it to do!  You’re the one in its territory!”, to siding with my gut feeling that this Coyote just messed with the wrong farmer.  “You take one of my family, you’re done.  You, Coyote, just trespassed into MY territory and my natural instinct tells me to make sure YOU never happen again.”

Here are some responses from Facebook regarding the question: “What would you do if a coyote killed one of your farm members?”:

“Take him down- our farm animals are family”
“Shoot it. We think we have a den near us we see them going back to the same area in the mornings. Our Pyrenees keeps them away but we are prepared to get them if they cross the fence.”
“Shoot it”
” I would fortify the poultry yard and evaluate the flock to make sure you have an adequate population size to sustain losses to local wildlife and still ensure a good breeding program and meat/egg supply”
“Not an endangered species – shoot it.”
“Shoot it”
“It’s part of nature. Do you think it should starve itself? Have you tried talking things through with it?”
“I might drop an Acme Anvil on it.”
What do you answer?  Please, continue the discussion.
–  The Goat Cheese Lady

I am Lindsey. At first I was a city girl. Growing up, the closest thing I had to farm animals were a cat and a cockatiel. In 2009, Herbert (my husband) and I bought our first milk goat and I instantly became an urban farmgirl, attempting to balance city and farm life..before I knew “urban homesteading” was a thing. That’s when we began The Goat Cheese Lady Farm, hence The Goat Cheese Lady blog you’re visiting now. After moving to the country in 2014, I embarked on life as a rural farmgirl. We continued teaching farm and cheesemaking classes, raising more goats and began construction on our cheese creamery. But life had other plans and in 2017, we decided that, due to financial and health issues, we had to close the farm for business. No more classes, no more creamery, a lot less milking. We went back to off farm jobs, I as an Occupational Therapist, Herbert in construction with his business, D&A Home Remodeling. At that point, I made a silent promise to myself that I would corral my entrepreneurial mind and focus on a job for a year. Well, it has been a year and I am back. Not to classes, cheese, soap or lotion, but back to writing. I love it. I’m not sure where it will lead me, but that’s where I’m starting. I’ll continue to write as The Goat Cheese Lady for now, and whatever the future holds, I’ll let you know. Our two boys are 14 and 11 and continue to be louder than my sister and I ever were. We have two dogs, Montaña and Flash, a cat, Jumpy, a flock of chickens and three goats. Yes, we still have Lucy, the goat who helped us start it all and was milked by over 1,000 people. She’s retired but still the boss. Chocolate provides enough milk for our family with some to spare for the dogs. Soccer friends, school friends, coyotes and mice are frequent visitors. There are way too many flies and every so often we see an owl. I’m glad you’re here. Sometimes you’ll laugh out loud, other times you’ll be inspired to appreciate the small things. My hope is that, over your morning cup of coffee or your afternoon work break, you’ll enjoy the antics and inspiration that are my daily life. Lindsey
View all posts by The Goat Cheese Lady →
This entry was posted in Farm Life, Kidding and tagged Animals, Farm Life, kidding. Bookmark the permalink.