The night before the pedicure, I responded to a comment on a neighborhood chat group. A new-to-the-area country neighbor was exasperated with so many mice.

What was she to do?  They carry illness and her children had been exposed to the droppings!  I proudly responded that, in the past, we had many, many, many zillion mice but after I found and stuffed the mouse holes with steel wool, covered some with trim, put out mouse poison, got a barn cat and learned to set a good mouse trap, we’ve had NO MORE PROBLEMS!  We haven’t seen hide nor hair of a mouse ever since!

Well, Pride Cometh Before The Fall and Karma? It’ll turn loose a mouse on the kitchen floor.

Which is exactly what happened the next morning, the morning of the pedicure.  The morning after the night where I basically bragged about my prowess as a mouse eliminator.  The morning of the day that I decided to *finally* do something “good for myself” and spend my hard earned $30 on a glorified toenail paint job.

That morning, at 5:45 am, bleery-eyed over his bowl of cereal, my 14-year-old muttered, “There’s a mouse.”  It had just run along the cabinet, behind the can of wheat berries and under the fridge.

So later that day, after work and the pedicure and after picking one kid and his buddy up at school, taking those kids to soccer practice, going home to get the other kid, taking the other kid to soccer, going on a run, picking up one kid from one soccer park, picking up the other kid from another soccer park, driving home, supervising both kids doing their “after practice list” (more on that another time), making dinner, eating dinner, barking for someone to do the dishes, drinking a glass of wine and getting everybody to bed, I proceeded to set mousetraps.

I am of the strong opinion that there is a Right Way to set mouse traps and a wrong way. The Right Way (i.e. My Way), I learned from the directions on the mouse trap package. The wrong way is my husband’s way.

Wait a minute. Did I just pick a fight over a mouse trap?

Yes. I did. But only because I’m Right and when I’m Right, I have to hold my ground.

Mice, according to my observation and the package instructions, run along walls and baseboards. Although they sometimes beat a path across the open floor, in my estimation, it’s only about 2% of the time. Since they mostly run right along where the floor meets the wall, it only makes sense that you should set the trap the Right Way, as follows:

When set the Right Way, the mouse doesn’t even think about it. They just do what their parents taught them and run straight along the wall not even noticing the fact that a life ending situation is up ahead. Instinctively, with the help of the odorless Tom Cat better-than-cheese-or-peanut-butter Gel, and a mouse’s low IQ, they have no choice but to run straight into the trap and WHAMO!

When set the wrong way, the mouse still runs along the wall, but depending on the direction from which he is coming, runs up on the back side of the trap, probably causing the trap to go off, but maybe not, maybe launching the mouse across the room, but probably not actually catching it. And there is also a distinct possibility that when you’re doing dishes and you forget it’s there, it will clamp down on your toe. Mouse traps don’t have judgement. They don’t know if you are a mouse or a toe. 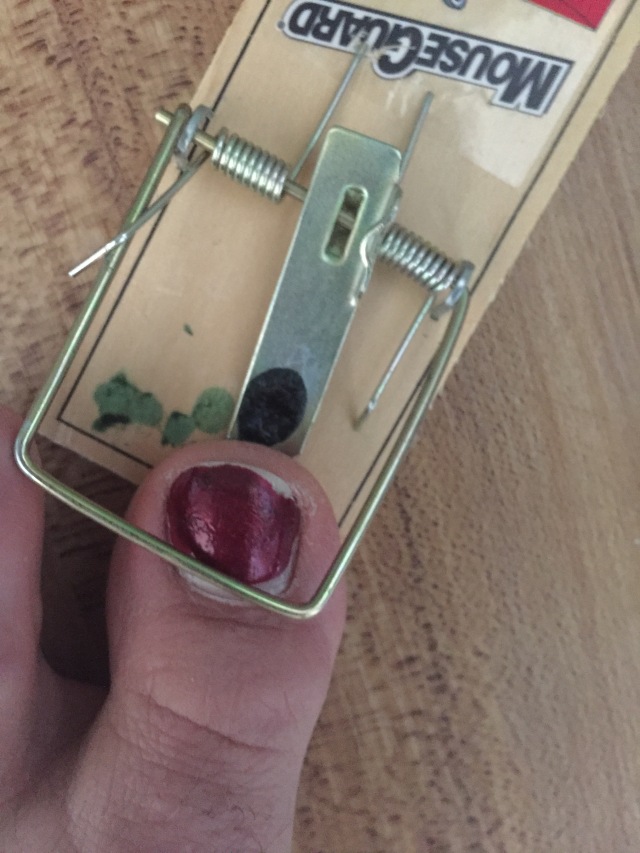 This reenactment photo was taken for dramatic effect only. This did not actually happen to me. But it could have.

Something similar did happen to my husband’s shoe.

This really did happen. Not to me but to my husband. I didn’t have my camera handy when it happened to him so I had to reenact this one too, using my foot.

So, to make a long story short, here are the 11 steps to setting a good mouse trap:

1. Get a basic wood mouse trap or seven.  Where there’s one mouse, there are more mice.

3. Carefully pull the whacker back and clamp down on it with your thumb while placing the holder stick thingy in place.

4. KEEP YOUR THUMB HOLDING DOWN THE WHACKER THE WHOLE REST OF THE PROCESS OR ELSE.

5. Dab some Tom Cat Gel on the spot where you used to put cheese, peanut butter, chicken shreds, raisins, ground beef (we tried them all).  Hopefully you planned ahead and opened the Tom Cat Gel bottle before step #3.  If not, you have to creatively open the nozzle one handedly. I would not recommend using your teeth. This stuff has come near dead mouse for goodness sake.

6. Gingerly put the mouse trap down the Right Way (perpendicularly to the baseboard/wall with the Tom Cat Gel end closest to the wall).

7. Hold your breath and RELEASE THE WHACKER VERY CAREFULLY. If it goes off from this position, it’ll most likely not catch your thumb but it will scare the tar out of you.

9. Listen for a WHACK sometime in the night.

10. Jump out of bed and go celebrate your success.  Give the deceased mouse to the barn cat.

But here’s the moral of the whole story: don’t get a pedicure the day of.  To set really good mouse traps, you might have to crawl on the floor. Well, at least I do.  And the unfortunate consequence of crawling on the floor with a brand new pedicure and without sensible toenail covering is this:

Your $30 burgundy rubs right the hell off.

Now, if you feel sad for this mouse, I understand.  I have a whole disceratation about that too.  But since you’re finished with your coffee and I need a break, I’ll tell you some other time.

Have a great day and go get either a mouse or a pedicure, but preferably not both.

Always looking out for you,

P.S. I don’t have any contracts with Tom Cat Gel or Mouse Guard traps or Sally Hansen, although I ought to consider it.  I’m sure after people read this, sales are going to sky rocket.

P.P.S.  Did you enjoy this?  If so, comment below or on facebook…your positive feedback keeps me going!  And if you’ll go the extra mile, share it with your friends on facebook!  Thanks!