Milking in the (cold) wind 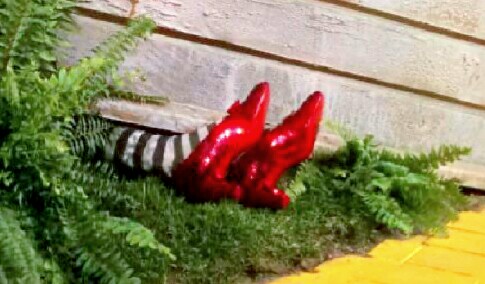 Before I went out to milk tonight, in the dark with gale force winds that sounded like they were kicking up a tornado of sorts, I warned my boys that if I wasn’t back inside within 30 minutes to start looking for me under a house in Kansas.  I gave them permission to remove my red slippers.  That of course, I recalled later, makes me a wicked witch… a fact my chore-laden children might not dispute.

When milking outside under the stars in the cold wind, you first contemplate the state of your pants.  While seated on the kindergarten sized milking chair and leaning forward for long periods, you begin to wish you had worn a belt.  When a cold gust blows, you immediately realize your waistband has migrated south.  Although you are not a plumber, you begin to feel a strange kinship with one as the icy wind travels the fleshy path deeper into your seat, all the while causing you to wish you could let go of the warm teats to cover the exposed skin, but reluctantly deciding not to in an attempt to keep goat feet out of the milk.

When you return one goat to the pen and grab the next, you have time to readjust your milking attire, only to repeat the above related process again.  This time, however, you aren’t quite as concerned, because the tip of your nose has now frozen and it has begun to run such that you feel the need to catch it.  You are able to keep it in check, but begin hoping the one big (dead) tree on the property, which happens to be within striking distance of you and the milking stand, does not release a large branch in your direction with its next howl.

Time to switch:  Second goat in, Third goat out.  Readjust clothing, sniff multiple times, glance at the waving arms of the tree, and proceed milking, only to notice that your finger tips are now numb.  The only redeeming factor of this facet of your chosen profession is that the goat’s teats are warm.  You gratefully keep your hands on them attempting to thaw your prints while relieving her of milk.

And, finally, the pot nearly full, it’s time for the fourth (and last) goat.  The good news is, she’s like milking a fire hydrant- the milk comes fast and steady.  You’ll be inside soon.  Good thing, because now your ears are numb.  And, with the final few squeezes comes a blasting wind that threatens to cause a milk tsunami in the now full pot.  Quickly, and with fumbling fingers, you put the lid on the pot, goat in the pen and race for the house, clicking your red slippers along the way.

I am Lindsey. At first I was a city girl. Growing up, the closest thing I had to farm animals were a cat and a cockatiel. In 2009, Herbert (my husband) and I bought our first milk goat and I instantly became an urban farmgirl, attempting to balance city and farm life..before I knew “urban homesteading” was a thing. That’s when we began The Goat Cheese Lady Farm, hence The Goat Cheese Lady blog you’re visiting now. After moving to the country in 2014, I embarked on life as a rural farmgirl. We continued teaching farm and cheesemaking classes, raising more goats and began construction on our cheese creamery. But life had other plans and in 2017, we decided that, due to financial and health issues, we had to close the farm for business. No more classes, no more creamery, a lot less milking. We went back to off farm jobs, I as an Occupational Therapist, Herbert in construction with his business, D&A Home Remodeling. At that point, I made a silent promise to myself that I would corral my entrepreneurial mind and focus on a job for a year. Well, it has been a year and I am back. Not to classes, cheese, soap or lotion, but back to writing. I love it. I’m not sure where it will lead me, but that’s where I’m starting. I’ll continue to write as The Goat Cheese Lady for now, and whatever the future holds, I’ll let you know. Our two boys are 14 and 11 and continue to be louder than my sister and I ever were. We have two dogs, Montaña and Flash, a cat, Jumpy, a flock of chickens and three goats. Yes, we still have Lucy, the goat who helped us start it all and was milked by over 1,000 people. She’s retired but still the boss. Chocolate provides enough milk for our family with some to spare for the dogs. Soccer friends, school friends, coyotes and mice are frequent visitors. There are way too many flies and every so often we see an owl. I’m glad you’re here. Sometimes you’ll laugh out loud, other times you’ll be inspired to appreciate the small things. My hope is that, over your morning cup of coffee or your afternoon work break, you’ll enjoy the antics and inspiration that are my daily life. Lindsey
View all posts by The Goat Cheese Lady →
This entry was posted in Farm Life, funny stories, goats, Milking and tagged Animals, Farm Life, funny stories, goats, milking. Bookmark the permalink.

6 Responses to Milking in the (cold) wind