We went to El Salvador in August.  That’s where The Animal Whisperer is from.  A friend took care of the goats, chickens, rabbits, dogs and garden so we could go spend some much needed time with our family and help celebrate our niece’s beautiful wedding, my mother-in-law’s 70th birthday, and our other niece’s fifteenth birthday. 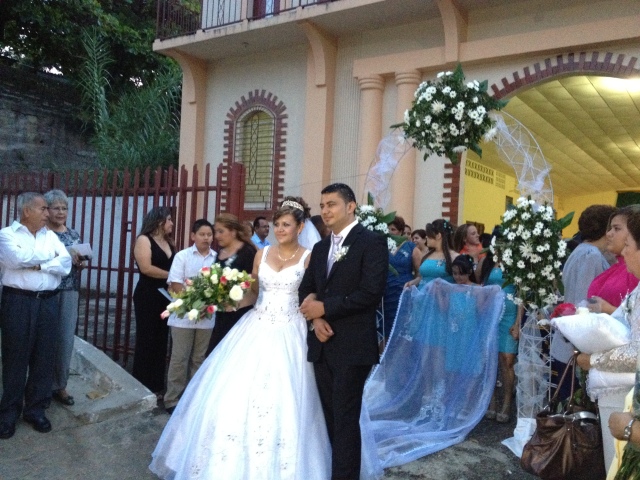 Whenever we go, my sister-in-law, Janell, (she and I are the only two gringos in the group) and I like to cook something for the family that is from us.  Kind of a gift from us to them.  But…many of the ingredients we use aren’t available in a single store like they are here.  Making something “our style” is quite an undertaking.  So, after two days of preparation, we made delicious, homemade pizza over the back yard “kitchen” fire.

Do I need to tell you IT WAS AWESOME?  Some qualifiers though:  First one, the crust was too soft. (It’s not as if she and I have a lot of pizza-over-the-fire cooking experience.)  The second one was PERFECT.  And the third one, people had to scrape the charcoal off the bottom of the crust.  But, all in all, it was AMAZING.

Next time we’re there, we’ll whip you up some.

And, when it was finished, we still had lots of dough.

AHA!!!,  I thought, Tomorrow, we’ll use the rest of the dough to make donuts!  What a stroke of brilliance! (Self imposed compliment.  After the following description, you may question my brilliance.)

We packaged up the dough in a plastic container with a tight fitting lid and put it in the fridge.  It’s a fast rising dough at 6500 feet in Colorado Springs, and WAY faster rising at near sea level, the lid would hopefully keep it contained.

Little did I know, the condensation it also kept contained would become the bane of my existence.

We arose the next morning, poured four or five inches of cooking oil into a pot, turned on the gas stove (no fire cooking today), and started forming the donuts.  Three by three, we gently placed them in the oil, me giving a lecturette I learned from Little House on the Prairie on how you know when the donuts are done.  On about donut fifteen, and just after I had told my kids to back away from the stove MORE, and just after my 1 1/2 year old niece had been ushered OUT of the kitchen, the donut I was pulling out of the oil with a dinner fork (did I mention I wasn’t using long tongs?  Yes, a 5 inch long dinner fork) EXPLODED.

It didn’t pop a little.  It didn’t spatter a small bit of oil.  It didn’t shoot one of those tiny drips that invisibly flies from the pan and lands on your forearm.

Any guesses what happened next?  Any idea what the lessons learned were?

I am Lindsey. At first I was a city girl. Growing up, the closest thing I had to farm animals were a cat and a cockatiel. In 2009, Herbert (my husband) and I bought our first milk goat and I instantly became an urban farmgirl, attempting to balance city and farm life..before I knew “urban homesteading” was a thing. That’s when we began The Goat Cheese Lady Farm, hence The Goat Cheese Lady blog you’re visiting now. After moving to the country in 2014, I embarked on life as a rural farmgirl. We continued teaching farm and cheesemaking classes, raising more goats and began construction on our cheese creamery. But life had other plans and in 2017, we decided that, due to financial and health issues, we had to close the farm for business. No more classes, no more creamery, a lot less milking. We went back to off farm jobs, I as an Occupational Therapist, Herbert in construction with his business, D&A Home Remodeling. At that point, I made a silent promise to myself that I would corral my entrepreneurial mind and focus on a job for a year. Well, it has been a year and I am back. Not to classes, cheese, soap or lotion, but back to writing. I love it. I’m not sure where it will lead me, but that’s where I’m starting. I’ll continue to write as The Goat Cheese Lady for now, and whatever the future holds, I’ll let you know. Our two boys are 14 and 11 and continue to be louder than my sister and I ever were. We have two dogs, Montaña and Flash, a cat, Jumpy, a flock of chickens and three goats. Yes, we still have Lucy, the goat who helped us start it all and was milked by over 1,000 people. She’s retired but still the boss. Chocolate provides enough milk for our family with some to spare for the dogs. Soccer friends, school friends, coyotes and mice are frequent visitors. There are way too many flies and every so often we see an owl. I’m glad you’re here. Sometimes you’ll laugh out loud, other times you’ll be inspired to appreciate the small things. My hope is that, over your morning cup of coffee or your afternoon work break, you’ll enjoy the antics and inspiration that are my daily life. Lindsey
View all posts by The Goat Cheese Lady →
This entry was posted in Bread Making, Farm Life and tagged Food, homestead food, skin care. Bookmark the permalink.