I Must Be Sick or Something.

For the second day in a row, I did not need a nap.  And I don’t mean just a cat nap.  I mean a 2 or 3 hour dead-to-the-world nap starting around 1ish for the last several months.  Thaaaaaaaaannnk Goodness!  It’s nice to get an extra 3 hours of stuff done.  Thanks to Citalopram, I know my naps are not depression induced, so I chalk them up to “I am listening to what my body needs.”  (now, strike a yoga pose)  It would be helpful, however, for my body NOT to need to sleep 8 or 9 hours at night, then again 2 or 3 hours during the day.  I would much prefer to hear my body say:  “You only need 5 hours of sleep each night and you’ll have all the energy you need all day long!!!”

But, whatever.  I’m thankful I have the time.

The box of cheap organic peaches I bought last week ripened right on schedule, like I figured it would, on a day I couldn’t deal with them.  The next day, mold.  That day, I stuck them in the fridge to stop the ripening, hoping to gain a little more naptime.  Napped.

Yesterday, I planned to can them.  Not so.

I got as far as cutting off the bad spots, blanching them in boiling water, putting them in ice cold water, peeling off the skins, slicing them.  Nothing else.  There was no canning happening yesterday.  (but no nap either.)

Today, however, with some source of energy recently foreign to me, I canned and cooked for 6 1/2 hours straight!  I started after milking this morning and finished around 3:30!  And, used up ALL those peaches!  Plus, a bunch of shredded zucchini still in the freezer since last summer. 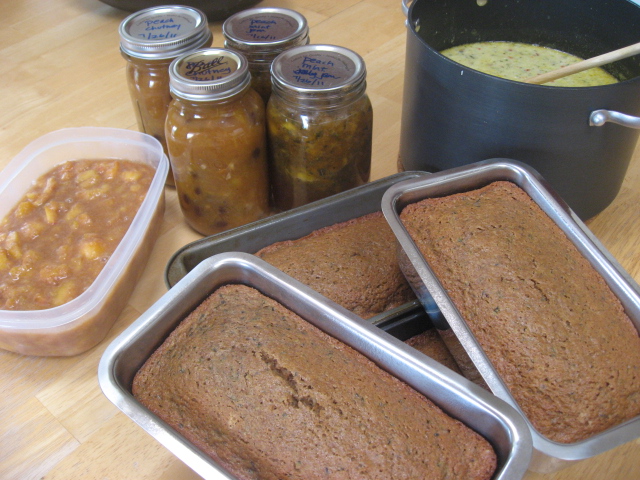 In the plastic dish is peach pie filling I’ll freeze and use in the winter.  In two of the jars are peach chutney.  In the other two are peach mint preserves.  In the pot is creamy zucchini soup.  In the four bread pans are zucchini bread.

Here’s the deal.  Once I actually eat each thing, if I like it and I don’t drop over dead, I’ll post the recipes.  For now, I’ll leave you drooling and cursing at me.

But, to calm you down, I’ll show you this:

I am Lindsey. At first I was a city girl. Growing up, the closest thing I had to farm animals were a cat and a cockatiel. In 2009, Herbert (my husband) and I bought our first milk goat and I instantly became an urban farmgirl, attempting to balance city and farm life..before I knew “urban homesteading” was a thing. That’s when we began The Goat Cheese Lady Farm, hence The Goat Cheese Lady blog you’re visiting now. After moving to the country in 2014, I embarked on life as a rural farmgirl. We continued teaching farm and cheesemaking classes, raising more goats and began construction on our cheese creamery. But life had other plans and in 2017, we decided that, due to financial and health issues, we had to close the farm for business. No more classes, no more creamery, a lot less milking. We went back to off farm jobs, I as an Occupational Therapist, Herbert in construction with his business, D&A Home Remodeling. At that point, I made a silent promise to myself that I would corral my entrepreneurial mind and focus on a job for a year. Well, it has been a year and I am back. Not to classes, cheese, soap or lotion, but back to writing. I love it. I’m not sure where it will lead me, but that’s where I’m starting. I’ll continue to write as The Goat Cheese Lady for now, and whatever the future holds, I’ll let you know. Our two boys are 14 and 11 and continue to be louder than my sister and I ever were. We have two dogs, Montaña and Flash, a cat, Jumpy, a flock of chickens and three goats. Yes, we still have Lucy, the goat who helped us start it all and was milked by over 1,000 people. She’s retired but still the boss. Chocolate provides enough milk for our family with some to spare for the dogs. Soccer friends, school friends, coyotes and mice are frequent visitors. There are way too many flies and every so often we see an owl. I’m glad you’re here. Sometimes you’ll laugh out loud, other times you’ll be inspired to appreciate the small things. My hope is that, over your morning cup of coffee or your afternoon work break, you’ll enjoy the antics and inspiration that are my daily life. Lindsey
View all posts by The Goat Cheese Lady →
This entry was posted in Farm Life, Recipes and tagged Food, Healthy, recipes. Bookmark the permalink.

2 Responses to I Must Be Sick or Something.