I was in the house with the boys.  The Animal Whisperer called me at 5:32pm from the barn (aaaaahhh, the benefits of cell phones) to tell me: “YOU BETTER GET DOWN HERE!!!”  I heard unnatural screaming in the background and needed no other explanation.

Meanwhile, the boys were up to their wrists in “magic muck”…a drippy, sticky mixture of cornstarch and water, dyed green with way to much food coloring…in the kitchen.  I jumped off the chair I was using to strip wallpaper and launched into shouting mode: “GET YOUR HANDS WASHED, YOUR COATS ON AND GET DOWN TO THE BARN…I’M NOT WAITING FOR YOU!!!”  (I’m not waiting for you, a necessary addition to my orders, to stop the whining that occurs any time I don’t wait for them for anything.)

I whipped on my barn clothes, recalling a friend telling me she gets “up to her elbows” in birthing fluid.  I yanked the goat birthing medicine box (similar to the suitcase an expectant mother packs a week or so before her due date) out of the closet and raced to the barn.  It’s a wonder I didn’t trip over any of the dogs on my way.

When I got to the barn, Star was lying on her side screaming, The Animal Whisperer was squatting cheering her on, and there was a black (slimy) head sticking out of Star’s rear.  Oh, how I wish I had an epidural for her.  Ouch.  I could feel her pain.

The Animal Whisperer sent me on a mission for something, and when I arrived back 15 seconds later, the black head was an entire body glommed out on the ground and there was tiny white hoof poking out of Star.  You just wanted to grab it and pull it out to end Star’s suffering.  But you didn’t.  You ran to the gate to let the green handed boys in the barn.  When you got back, with boys in tow, you saw: 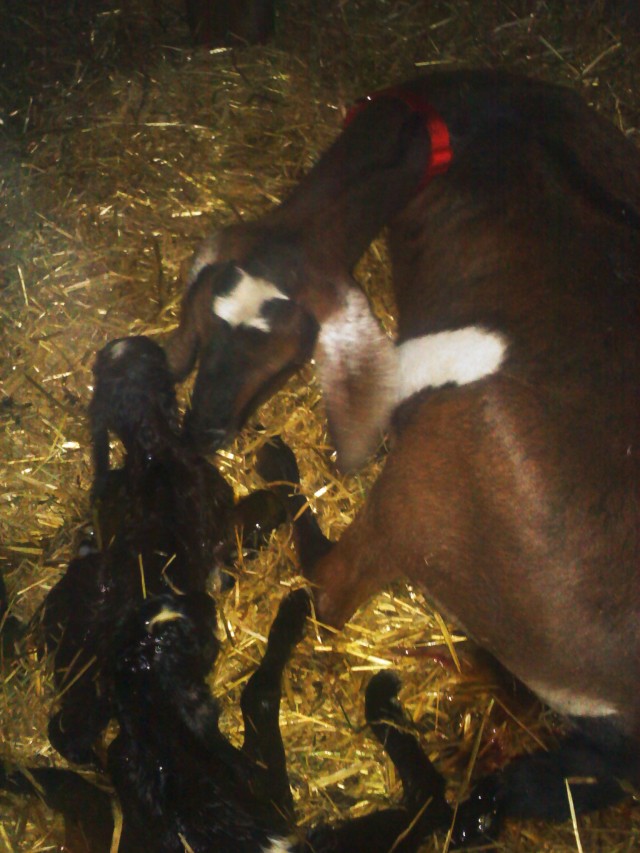 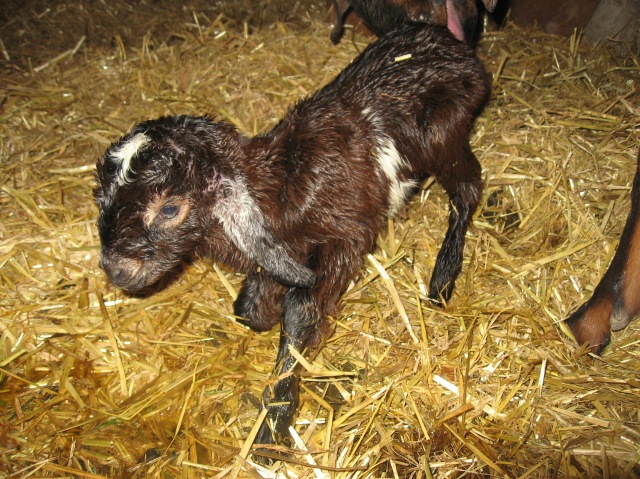 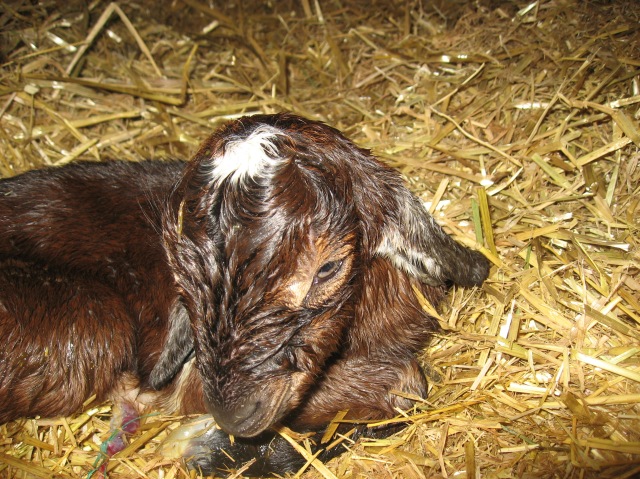 She was the second one out and was squeezed inside Star so tight that the little joints above her front hooves don’t straighten out, so she stands on her ankles instead of her feet.  When she stands.  Which was hardly at all last night. 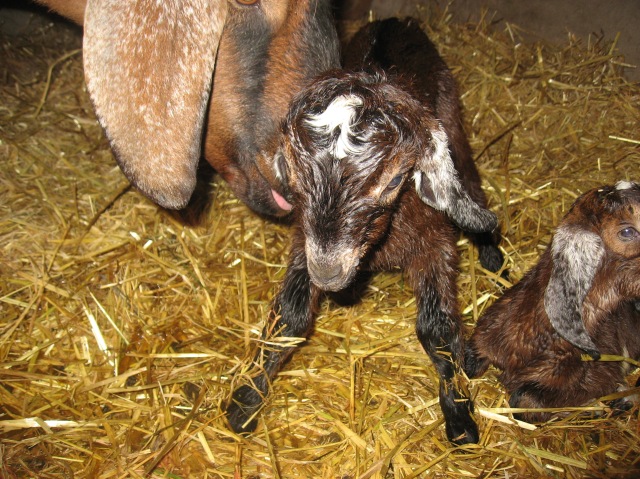 Star is a good mama, she licked them and cleaned them up for a good couple hours (but, not one of the 3 goats figured out someone should have something to eat.) 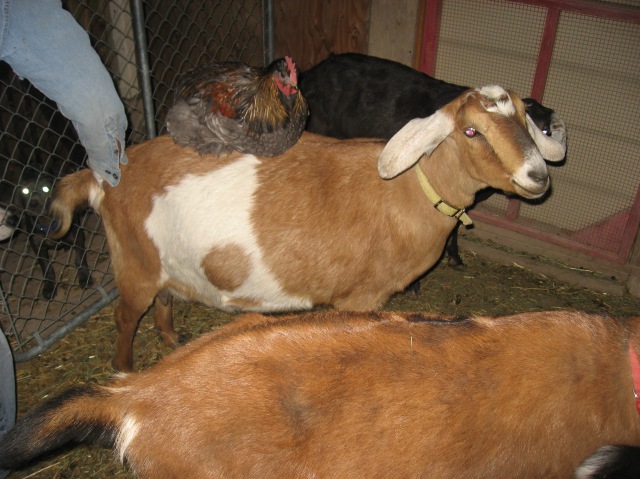 Meanwhile, the Peanut Gallery was locked outside the barn. 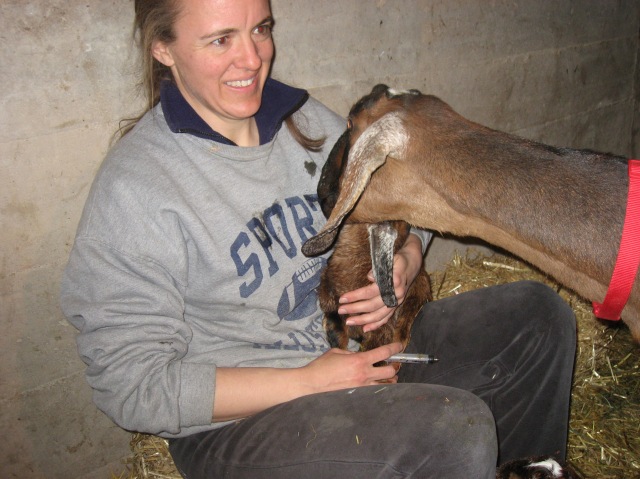 I never did get quite up to my elbows in birthing fluids, but did get a pretty dirty. 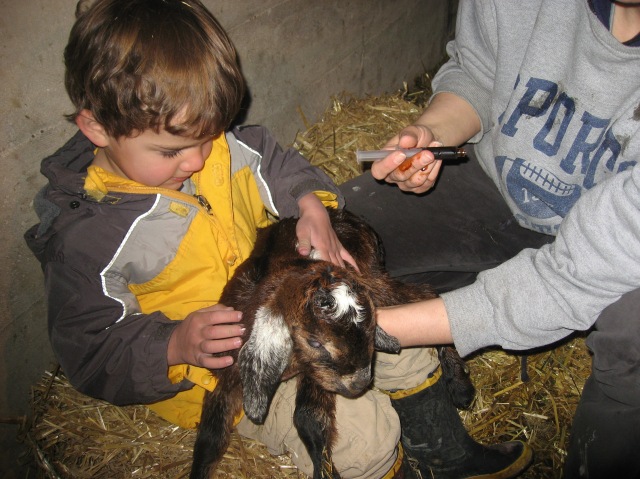 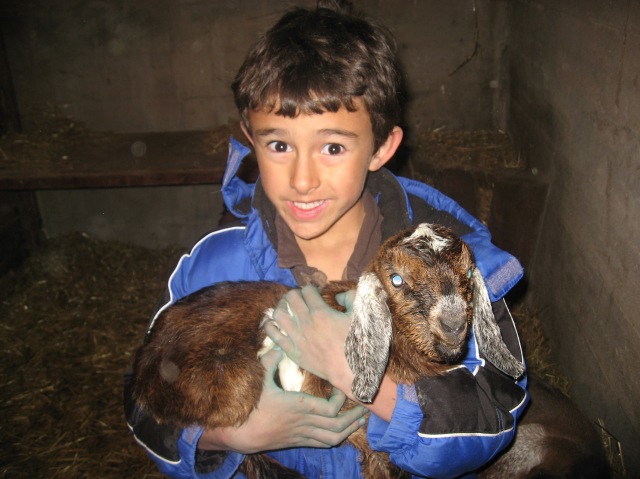 And, finally, we moved them to the Royal Quarters.  A special stall The Animal Whisperer built in the barn with a heat lamp, clean straw, food and water for some family bonding time.

And, that would be where, later, around 9:30, I single handedly wrestled Star into letting her babies learn to nurse.

And sat on a hay bale in the light of the red heat bulb contemplating my life’s journey, and where it has led me.

Staring straight into the face of a goat.

8 Responses to Rain and Flame.