To Slaughter or To Be Slaughtered 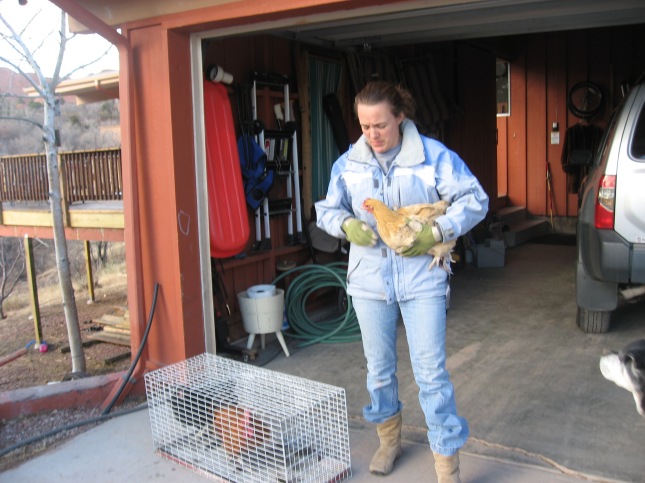 2 Chickens and 1 Rooster:  To Be Slaughtered.

I really never thought I could (would) bring myself to be the slaughterer.  The Animal Whisperer does that.  I don’t have a problem eating it, it’s just that I have had the luxury of staying in the kitchen to be the recipient of the slaughtered.  It arrives to me similar to how a grocery store chicken arrives to me.  Except without the styrofoam and plastic wrap.

This time was different.  The Animal Whisperer had surgery on his wrist and thus has (temporarily) lost his slaughtering capability.  But, he brought home two free hens and one free rooster.  To eat them.

I’ve seen various stages of the process, but have never actually done any of it myself.  Nothing.  Nada.

So, I decided it was my time.  My time to live up to my farm girl persona.  Time to see if I have what it takes to be considered a pretty good, pretty real farm girl.

That’s me after I killed the first one.  Notice the slightly disgusted look on my face.

I did not enjoy the actual killing part.  I’ve never taken the life of any living thing bigger than a stink bug.  But, I did it.  I followed most of the Animal Whisperer’s directions for how to do it and what to do.  The boys watched.  I do believe they were actually proud of their mother.  At least I like to think that, anyway.

My father, on the other hand, is shocked.

I proudly told them that night at dinner that I had slaughtered, all by myself, my first chickens that day, and in a rare occurence in our family, my dad was speechless.

My mom spoke, although not very intelligibly.

Dad is still adjusting to what the heck happened to his college-educated-daughter-turned-Laura-Ingalls.  He still loves me, of that I’m certain, but it is quite possible that he will never adjust.

I’ve told them both that they will not be going to nursing homes when the time comes…which won’t be any time soon.  They don’t have time to fit a nursing home in any time in the next 35 years due to their busy schedule of cycling, exercising, traveling, and thoroughly enjoying retirement.  But, if the time ever comes that they might need to have a lot more care, I’ve told them, they’re moving here.

I’ll cut their toenails.  (Something that has concerned my mom for years).

I’ll take care of them.

So, Dad, you’ll just have to adjust to eating home-grown chicken and drinking goat’s milk.  Maybe by that time you’ll need everything pureed, so you won’t know the difference anyway.

And, Mom, I know you’ll just smile and eat it no matter what I give you.

I love you both.

And, one of those chickens was REALLY good the other night in the soup I made.

7 Responses to To Slaughter or To Be Slaughtered