Posted on December 3, 2010 by The Goat Cheese Lady

My friend, Rachel.  The goddess of Quicken.  Spent hours (and hours) with me to set up Quicken in my attempt to ditch receipts and bank statements and year-end hours of organizing tax junk forever.  I totally owe her.

I had no idea one could do anything with a crab apple other than make it into jelly that doesn’t sound very good or squish it on the sidewalks.

I, for one, have never cooked a crab apple.  Nor picked one.  Nor cored one.  Nor anything elsed one.

Until Rachel told me she loves crab apple pie.  That was the precursor to me developing potentially incurable arthritis in my right thumb knuckle.  But it was all for Rachel.

The crab apples on my tree were easily confused with marbles.  I am not even going to try to core, slice or cook a marble.  So, when I found the mother load of crab apples the size of golf balls, I knew I had hit the jack pot. 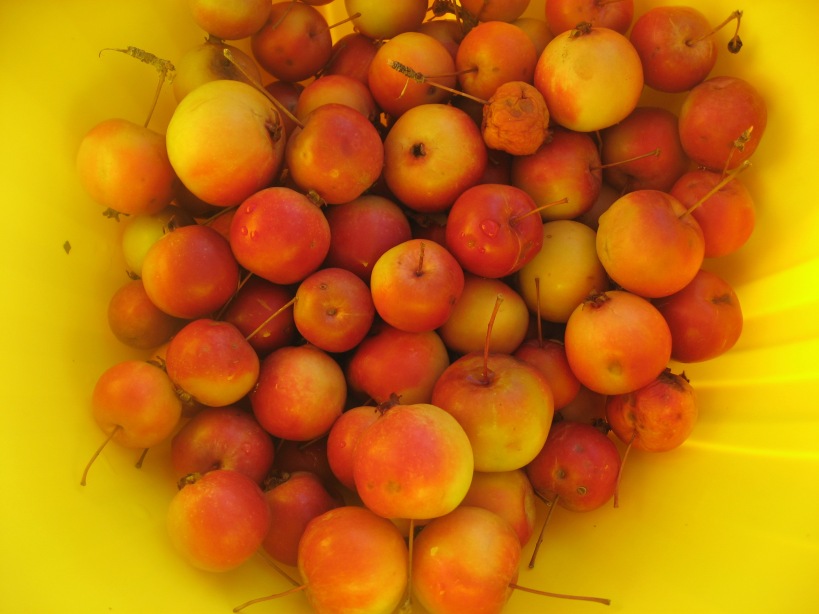 There were only two issues.  Or three.

1.  It was on the side of the street just outside the gate to a private neighborhood.  Mostly the only people who drive on that road are people going to their really big homes inside that private, gated neighborhood.  And their guests.  I was pretty sure…no actually, I wasn’t one bit sure…if this tree was on public or private land.  But decided to chance a drive by picking anyway.

2.  I was in a cute summer dress and even cuter summer flats.  Not your typical picking attire.

3.  My sister with her days-old-baby was in the car, illegally parked across the road from the tree in the only spot of shade we could find to keep them out of the blazing sun.

Well, I thought, if it’s private, I’ll be picked and outta here before the legal authorities arrive.  And, why not pick fruit in my summer dress and flats?  When the mansion owner in the BMW drives by, at least he’ll think I’m not some random riff-raff invading the neighborhood.  And, my sister and precious niece can survive a quick stint in the shadish type area.

That tree was naked when I left.  I was not arrested.  And those crabs went happily into Rachel’s pie.

After a lot of work.

I picked about 50ish.  Then cut them into quarters.  Then cored them. 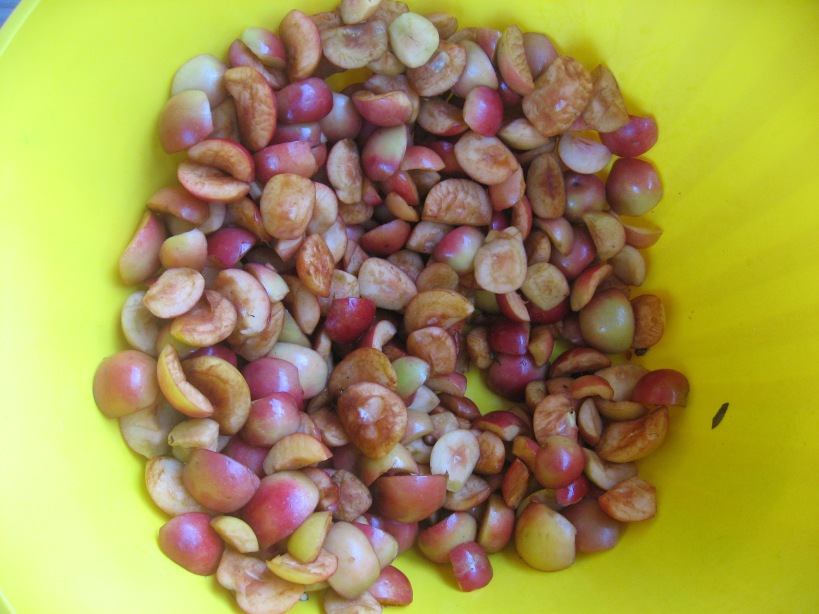 Now, that will explain the hour or so I sat on the deck that day.

And, it will explain the frightenly rapid onset of arthritis in that thumb joint.

(It does not however explain the frightenly lizard-like skin on my 35 year old hands.  Note to self:  Must use more lotion.)

And after being frozen for a couple months awaiting the perfect time to make the pie, today was the day.  Rachel was here with my mom, Patty, for the bread making class, so we slipped in a special pie making edition as well.  This is how it turned out. 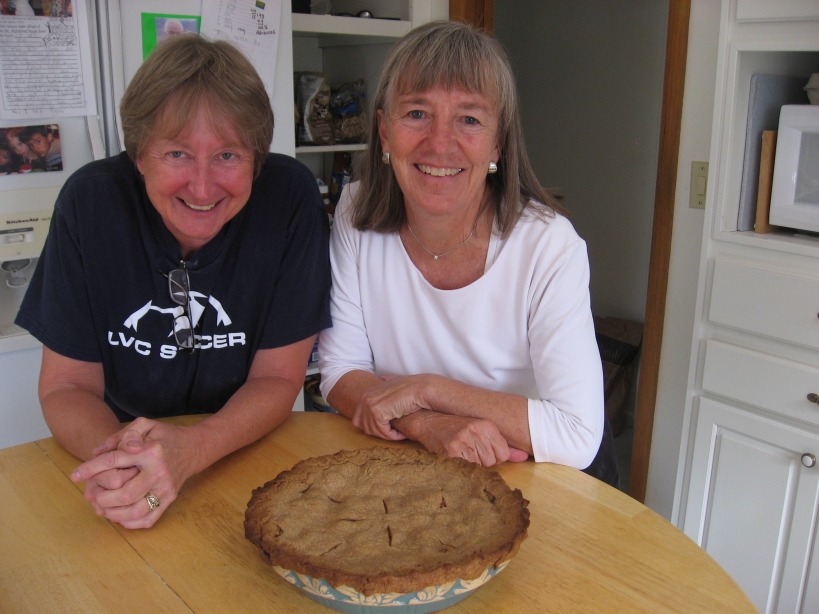 Rachel is on the left, Patty on the right.  Salivating.

I made them both smell it before I cut into it.

And, crab apple pie just might become a (once a year) staple.

My thumb can’t handle any more than that.

I am Lindsey. At first I was a city girl. Growing up, the closest thing I had to farm animals were a cat and a cockatiel. In 2009, Herbert (my husband) and I bought our first milk goat and I instantly became an urban farmgirl, attempting to balance city and farm life..before I knew “urban homesteading” was a thing. That’s when we began The Goat Cheese Lady Farm, hence The Goat Cheese Lady blog you’re visiting now. After moving to the country in 2014, I embarked on life as a rural farmgirl. We continued teaching farm and cheesemaking classes, raising more goats and began construction on our cheese creamery. But life had other plans and in 2017, we decided that, due to financial and health issues, we had to close the farm for business. No more classes, no more creamery, a lot less milking. We went back to off farm jobs, I as an Occupational Therapist, Herbert in construction with his business, D&A Home Remodeling. At that point, I made a silent promise to myself that I would corral my entrepreneurial mind and focus on a job for a year. Well, it has been a year and I am back. Not to classes, cheese, soap or lotion, but back to writing. I love it. I’m not sure where it will lead me, but that’s where I’m starting. I’ll continue to write as The Goat Cheese Lady for now, and whatever the future holds, I’ll let you know. Our two boys are 14 and 11 and continue to be louder than my sister and I ever were. We have two dogs, Montaña and Flash, a cat, Jumpy, a flock of chickens and three goats. Yes, we still have Lucy, the goat who helped us start it all and was milked by over 1,000 people. She’s retired but still the boss. Chocolate provides enough milk for our family with some to spare for the dogs. Soccer friends, school friends, coyotes and mice are frequent visitors. There are way too many flies and every so often we see an owl. I’m glad you’re here. Sometimes you’ll laugh out loud, other times you’ll be inspired to appreciate the small things. My hope is that, over your morning cup of coffee or your afternoon work break, you’ll enjoy the antics and inspiration that are my daily life. Lindsey
View all posts by The Goat Cheese Lady →
This entry was posted in Bread Making, Farm Life. Bookmark the permalink.