I do not, I said I do not, get up anywhere near 4:30 am like The Pioneer Woman and her kids do.  And there’s no way my children would allow their bodies to get anywhere near upright at that hour either.  I admire her.  I just do not do it.

Weekends and holidays, I sleep in, since, I rationalize, the goats don’t have to be milked every 12 hours on the dot.  Plus or minus a few hours doesn’t hurt.  I mean back when I was nursing, it was no problem if my babies slept a couple hours longer and I didn’t get milked on schedule.  Right?  There was no excrutiating pain.  No mastitis.  No leaking.  I didn’t explode.  Have I mentioned that milking goats is sort of, well, pretty much like, milking people?

Pike’s Peak is pink.  We can’t see the sunrise from our house, but this is just as good, or even better.

My faithful companion Oso.  He sniffs out rattlesnakes as a side job.

And Puffy, a.k.a the Kitty, our cat who has only 3 lives left.

(Another story for another time.)

And they’re off!  Canela and Lilac race out of the barn, not to be beaten by the chickens. 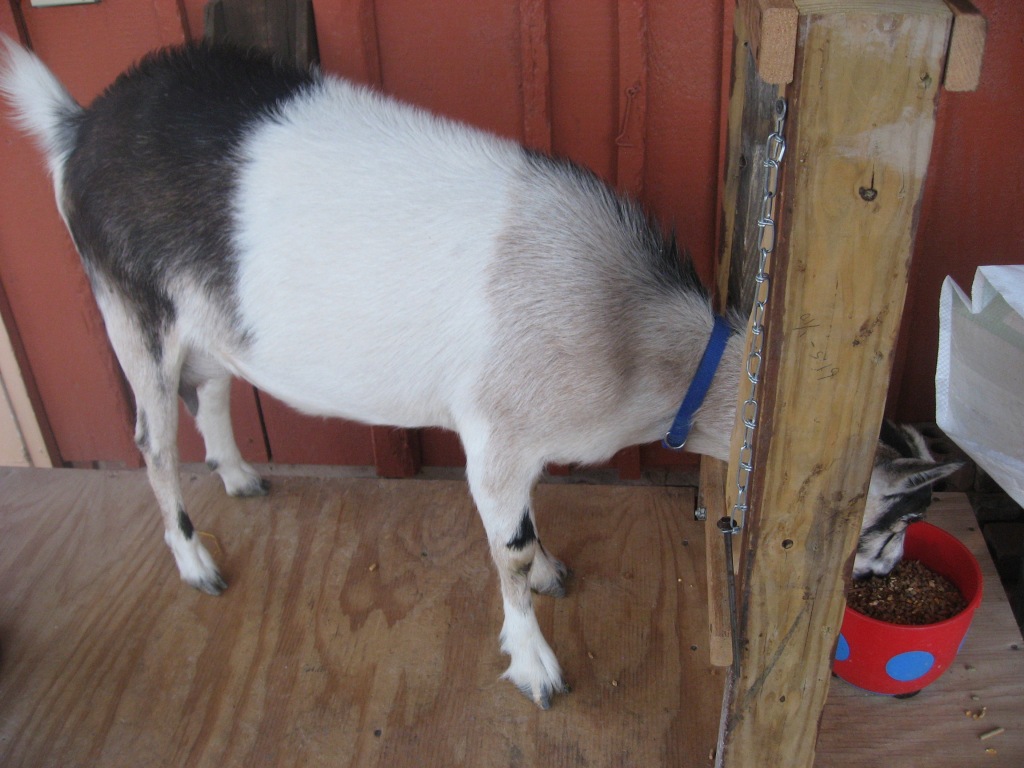 Lilac knows she’s always milked first, and she knows right where to go.

Get some wipes.  (Unfortunately, Kirkland does not pay me for advertising)

Wipe the first teat off really well to clean it.

Then the second one. 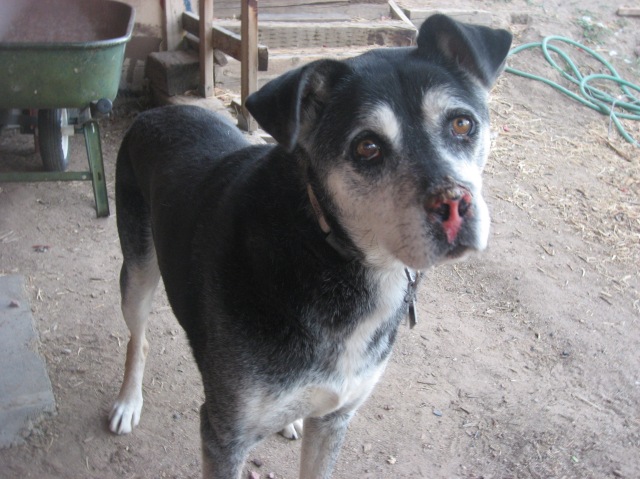 Then glance to your right and ask Oso to pose for a picture.  I know.  His red nose looks like it hurts.

He is a distant cousin of Rudolph.  He has lost his flying abilities though, and the other reindeer were too mean to him.

Actually, he has dog Lupus.  It’s not contagious to people.  It does hurt, especially if someone bonks it.

Get a milk pan under there.  Why not use my best soup pan?  I mean it gets washed, right?  If one of my kids or the Animal Whisperer decided to use it for any purpose other than its actual cooking one, they would be in DEEP trouble.  But, I, as the boss of the milking, get to use my pan however I want.  And this morning, since I was too lazy to wash the other milking pan last night, I eagerly chose this one. 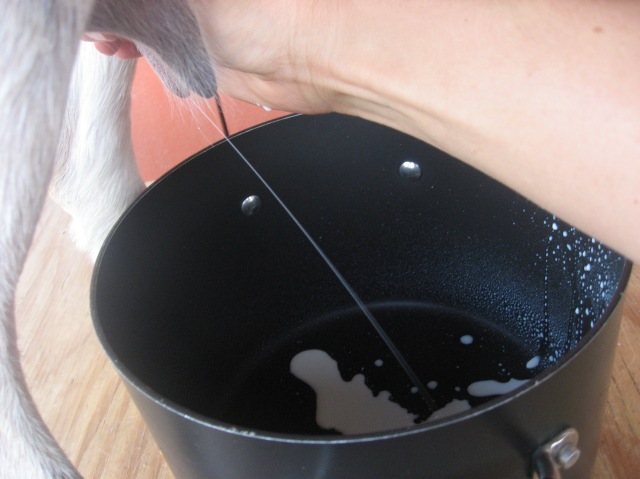 Then look left and see this.  Another reason I don’t miss seeing the sun actually rise.

And look down and see this.  The Kitty’s morning ritual.  Purr and prance and… 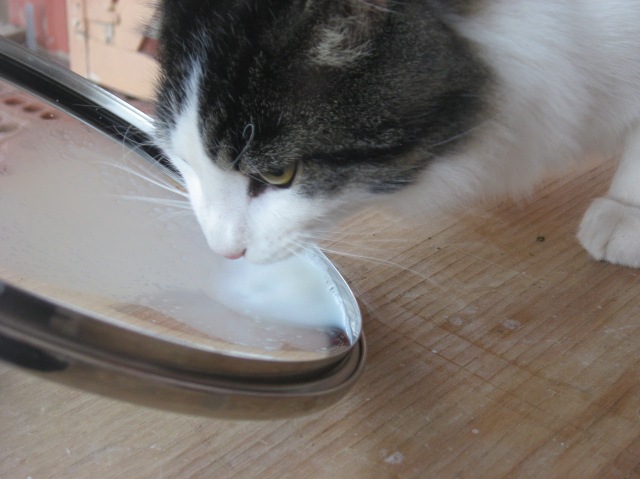 Until she convinces me to give her a little milk.  She drinks that up in about 27 little, lightening fast Kitty licks and then tries: 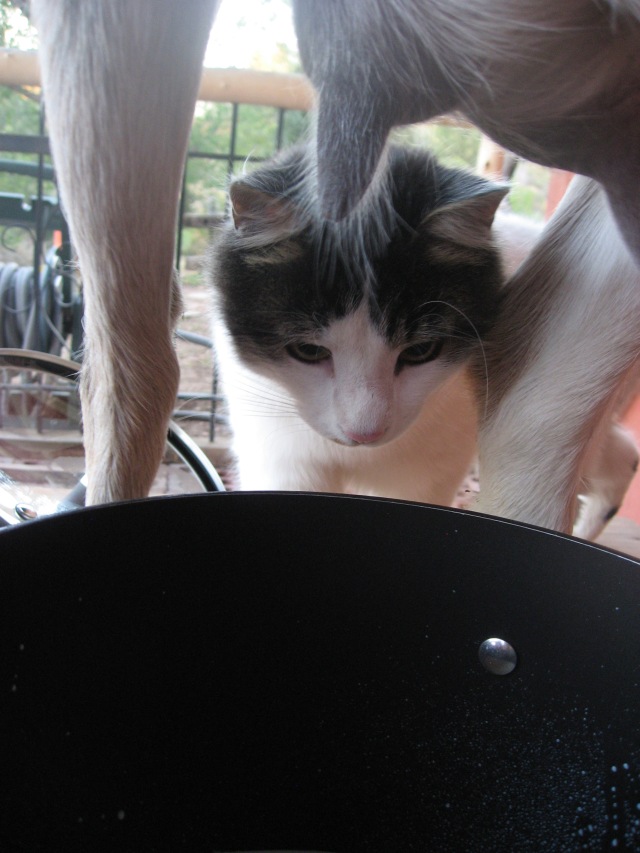 Immediately following this brazen attempt, she got stepped on.

And finally, after all of the previous 10 minutes of distractions and one handed picture taking, I am rewarded with this.  (Note:  The milk pan is usually not so messy.  My aim was definately off this morning.)

And, I thank Lilac.  Or maybe I forgot to?

And put her back in the goat pen until her next scheduled escape.

She too knows EXACTLY where the food is.  Even if it includes conquering her deeply engrained psychological fear of walking past Oso.

The Animal Whisperer recently asked me:  “Aren’t you glad your boobs aren’t between your legs?” 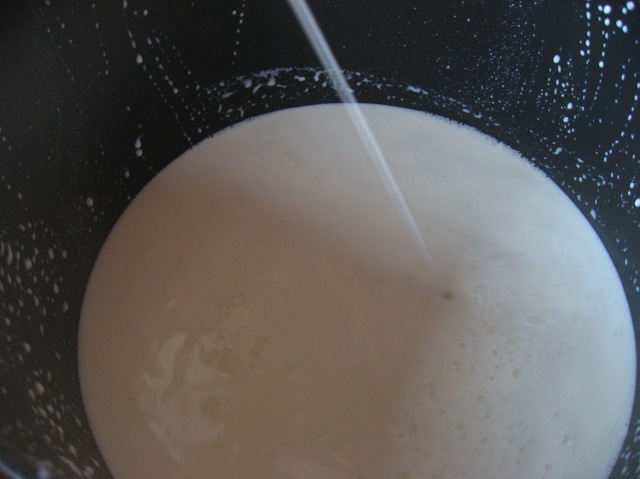 So, here goes.  Canela gives about 3 times the amount of milk as Lilac. 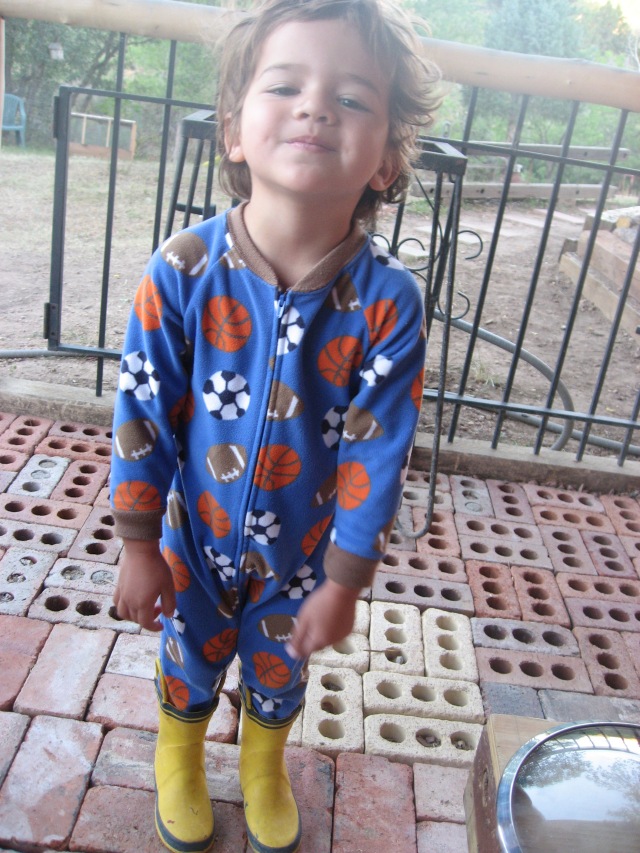 And, to my surprise…My third faithful companion showed up on the scene!

And, the finished product.  A really big cappuccino.  Minus the coffee.

I am Lindsey. At first I was a city girl. Growing up, the closest thing I had to farm animals were a cat and a cockatiel. In 2009, Herbert (my husband) and I bought our first milk goat and I instantly became an urban farmgirl, attempting to balance city and farm life..before I knew “urban homesteading” was a thing. That’s when we began The Goat Cheese Lady Farm, hence The Goat Cheese Lady blog you’re visiting now. After moving to the country in 2014, I embarked on life as a rural farmgirl. We continued teaching farm and cheesemaking classes, raising more goats and began construction on our cheese creamery. But life had other plans and in 2017, we decided that, due to financial and health issues, we had to close the farm for business. No more classes, no more creamery, a lot less milking. We went back to off farm jobs, I as an Occupational Therapist, Herbert in construction with his business, D&A Home Remodeling. At that point, I made a silent promise to myself that I would corral my entrepreneurial mind and focus on a job for a year. Well, it has been a year and I am back. Not to classes, cheese, soap or lotion, but back to writing. I love it. I’m not sure where it will lead me, but that’s where I’m starting. I’ll continue to write as The Goat Cheese Lady for now, and whatever the future holds, I’ll let you know. Our two boys are 14 and 11 and continue to be louder than my sister and I ever were. We have two dogs, Montaña and Flash, a cat, Jumpy, a flock of chickens and three goats. Yes, we still have Lucy, the goat who helped us start it all and was milked by over 1,000 people. She’s retired but still the boss. Chocolate provides enough milk for our family with some to spare for the dogs. Soccer friends, school friends, coyotes and mice are frequent visitors. There are way too many flies and every so often we see an owl. I’m glad you’re here. Sometimes you’ll laugh out loud, other times you’ll be inspired to appreciate the small things. My hope is that, over your morning cup of coffee or your afternoon work break, you’ll enjoy the antics and inspiration that are my daily life. Lindsey
View all posts by The Goat Cheese Lady →
This entry was posted in Farm Life, Milking. Bookmark the permalink.